As with any investigation, more data points will bear out the best results. Results that are as close as possible to accurate and precise will yield the best outcome. In the case of locating underground utilities in a non-destructive way, accuracy and precision can be understood as the following:

Accuracy can be defined as the proximity that can be achieved to a known value. This is difficult when working with the potential of unknown values. Accuracy can be confirmed by exposing the located target and therefore comparing results to what is true. This is not typically done due to the general acceptance of the technologies used as being relatively accurate for practical excavation purposes.

Precision can be defined as detecting the same target in the same location multiple times. Precision is increased when more than one investigative technology is applied. This high level of precision in a SIM investigation is possible due to the use of GPR and an electromagnetic receiver. However, if one of the technologies suffers inconclusive results based on site interference or an unfavorable soil type, one technology may need to be accepted as providing the only reliable results. 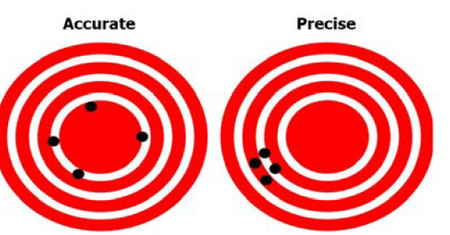 This discussion of accuracy and precision is different for scanning concrete for critical targets like embedded PVC conduits. When GPR is used to scan concrete for embedments the control unit will image the targets inside of the slab. The targets are displayed for the technician to mark out. System adjustment is automatic. Accuracy and precision are a function of the manufacturer’s software.

In addition to GPR being used to image steel reinforcement in the slab, SIM also calls for a passive sweep of the pipe locator/EM receiver to confirm the area has no energized conduits. GPR is capable of imaging a plastic pipe in concrete but cannot determine if the conduit is energized.

Understanding the two primary technologies of SIM is a requirement of the field technician. Operating principles and understanding the basic technology are key to maximizing scan results on site. 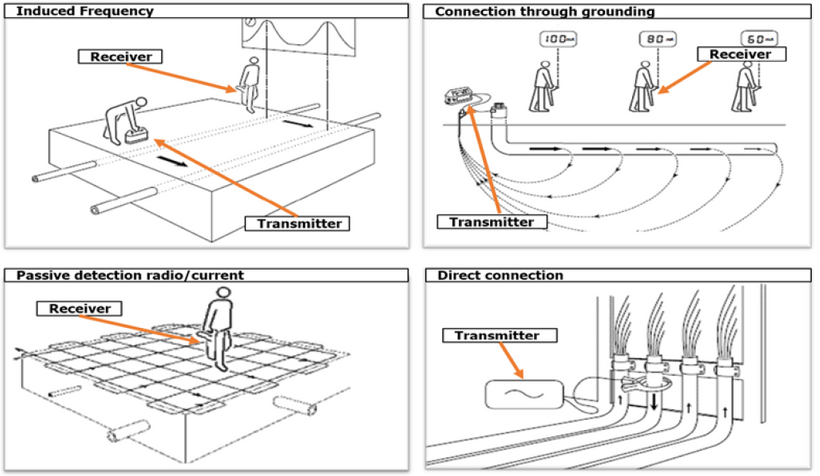 This equipment has several ways of being applied to the SIM investigation: 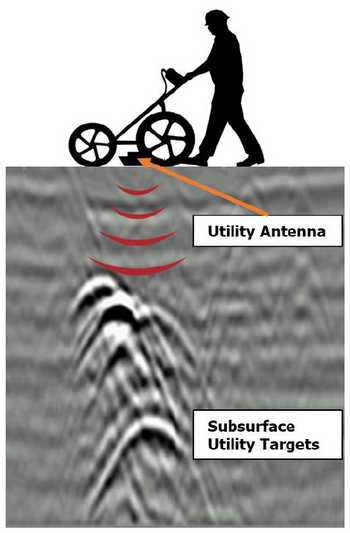 The technician associates the shape with a specific point on the ground. This is done through the use of a distance tracking wheel build into the system by the manufacturer. A mark is made by the technician based on the shape and positioning wheel. This can be a paint mark or a flag.

With many paint marks made, the underground utility can be located and thus non-destructively designated. Depths are determined by where the target shape is detailed on the controller screen in relationship to a scale on the screen provided by the manufacturer.

Scan Results: Scan results are collected by moving the antenna and control unit over the area of suspected subsurface targets. As the antenna is passed over the ground or concrete, the target shape builds on the controller screen. When a target is realized, it is marked by the field technician. This process continues in a systematic fashion until all of the area to be scanned is passed over in several directions.

The traditional electromagnetic (EM) locator will only yield good results based on the technician’s ability to apply it to the site. The four modes of operation detailed below will locate, identify, and trace various underground utilities. The purpose of applying SIM on site is to exploit more than one of the four methods, thus assuring a high level of accuracy and precision.

A direct connection to the underground utility is normally the first option due to its high level of accuracy. This method sends an electrical current through a conductive utility or tracer wire, thereby creating an electromagnetic field that can be detected by the receiver. This method can only be used if there is access to the conductive surface of the utility in question.

Induction can be used when there is no access to a conductive surface of the utility. An induction clamp can be placed around a utility or the transmitter can be used to emit a field at a high enough frequency to induce a current onto conductors in the area. The induction clamp works best when the conductor is grounded at each end. Inducing directly with the transmitter can work very well for a utility for which there is no access but the generated field will also induce other conductors in the area so it can be difficult to isolate an individual utility.

Passive Operation is normally the final option but should always be performed. A passive sweep can be used to confirm markings from other methods but will also indicate unknown utilities that are emitting an electromagnetic field. This method is limited to detecting conductors around which there is already an electromagnetic field being created. It will detect either 60 Hz frequencies created by electrical current, cathodic protection frequencies, or various radio wave frequencies being carried by conductors within the utility. The type of utility can only be determined by tracing the utility to a surface feature or a logical end point.

Temporary Insertion of a sonde and/or traceable rodder can be used to trace nonmetallic utilities such as sewer and storm drain lines. A sonde is a battery-powered transmitter that can be pushed through a pipe in order to pinpoint specific locations along the pipe with a high-powered signal. A traceable rodder allows the technician to send a conductor through a nonconductive utility, send current through the rodder, and thereby trace the nonmetallic utility for the entire length of the rodder. This method requires access to the inside of the pipe and care must be used to ensure that the pipe is a sewer or drain line as opposed to an empty conduit which could potentially lead back to a live electrical circuit.

Utilities can often be located at depths of up to 20’ or more depending on a variety of factors. Accuracy Expectations: the equipment has the ability to pinpoint a utility with a very high level of accuracy but this accuracy depends on the ability of the technician to use the equipment properly and to recognize when there will be problems with accuracy such as distortion in an electromagnetic field.

GPR has many advantages; it can detect both metallic and non-metallic objects in the ground and in concrete. It also can image previously disturbed soils, thus detecting past excavations.

The GPR equipment will automatically adjust to varying conditions in the field. Conditions specific to a particular site may impact target delineation thus reported results may be poor. It is critical for the field technician to follow specific instructions regarding length, direction and spacing of results collection. These instructions are implemented through the recommended SIM on site methods.